Blog > The Shape of Our Time

The Shape of Our Time

The Shape of Our Time 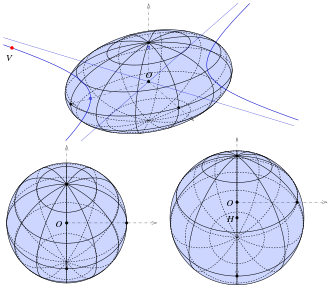 There are universal symbols that identify or spark memories of times gone by; whether it is the fleur- de- lis of France, the double-headed eagle first seen in the Early Bronze Age or psychedelic polka dots of the 1960’s. Circles and spheres are part of my visual language -and are filled with  extensive symbolism --the shape implies: the notions of totality, of wholeness, of infinity, of eternity, of timelessness, of original perfection, of God. 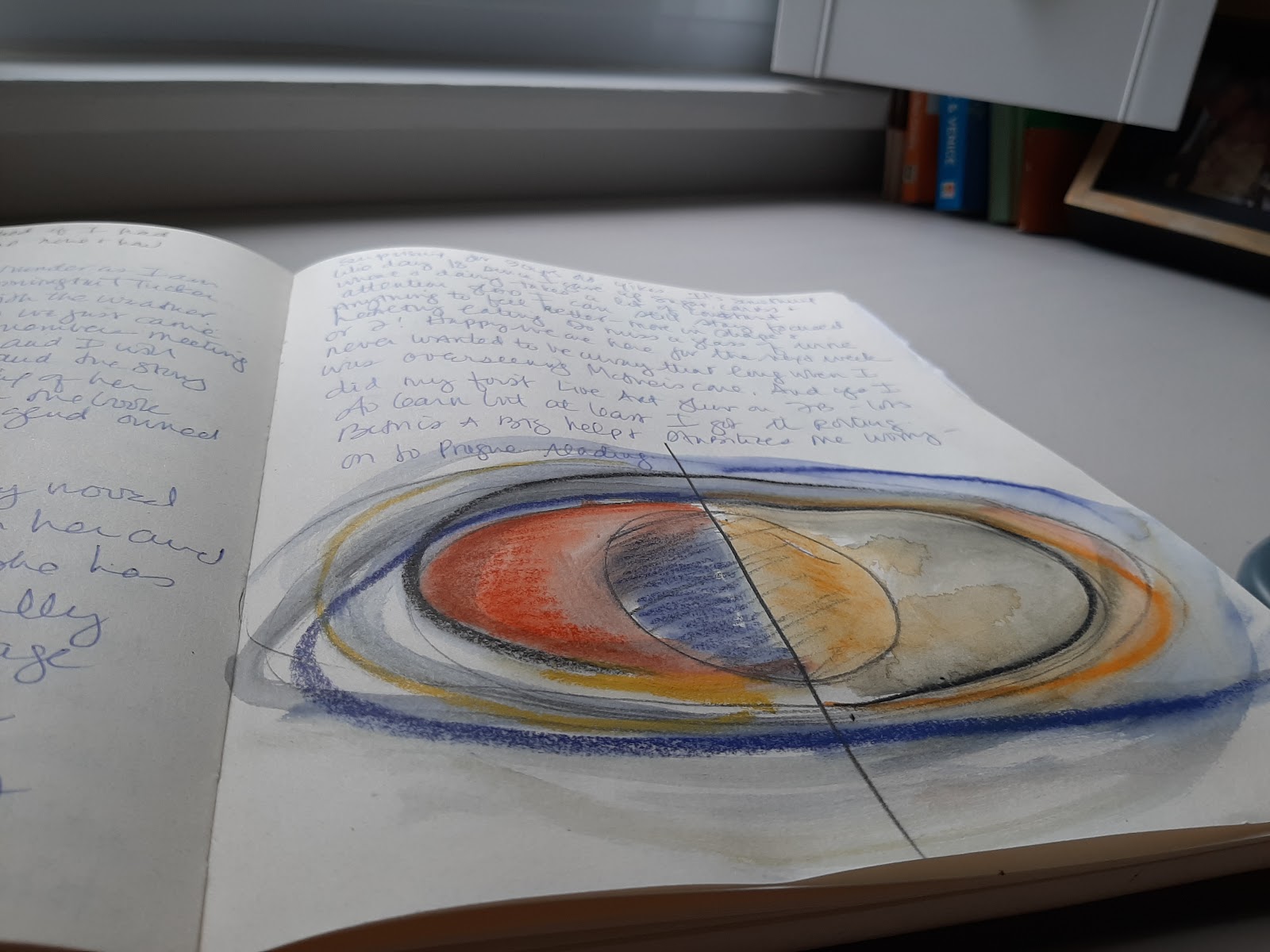 Deep seeded insecurities about our physical wellness and the complex disruption of our everyday rhythms has made my favorite symbol morph into a spheroid , a shape very similar to a sphere but it is  generated by rotating an ellipse around one of its axes . So, as the Covid-19 virus was unfolding in March, the severity of the global situation became clear : the human race has no immediate  tools to control the  disease. The global pandemic seeped quickly into my psyche and into my studio.  The thought of views from outer space and uninterpretable data charts began filling my head- the unknown circumstances came to an artful fruition.

“If our sides were unequal our angles might be unequal …” 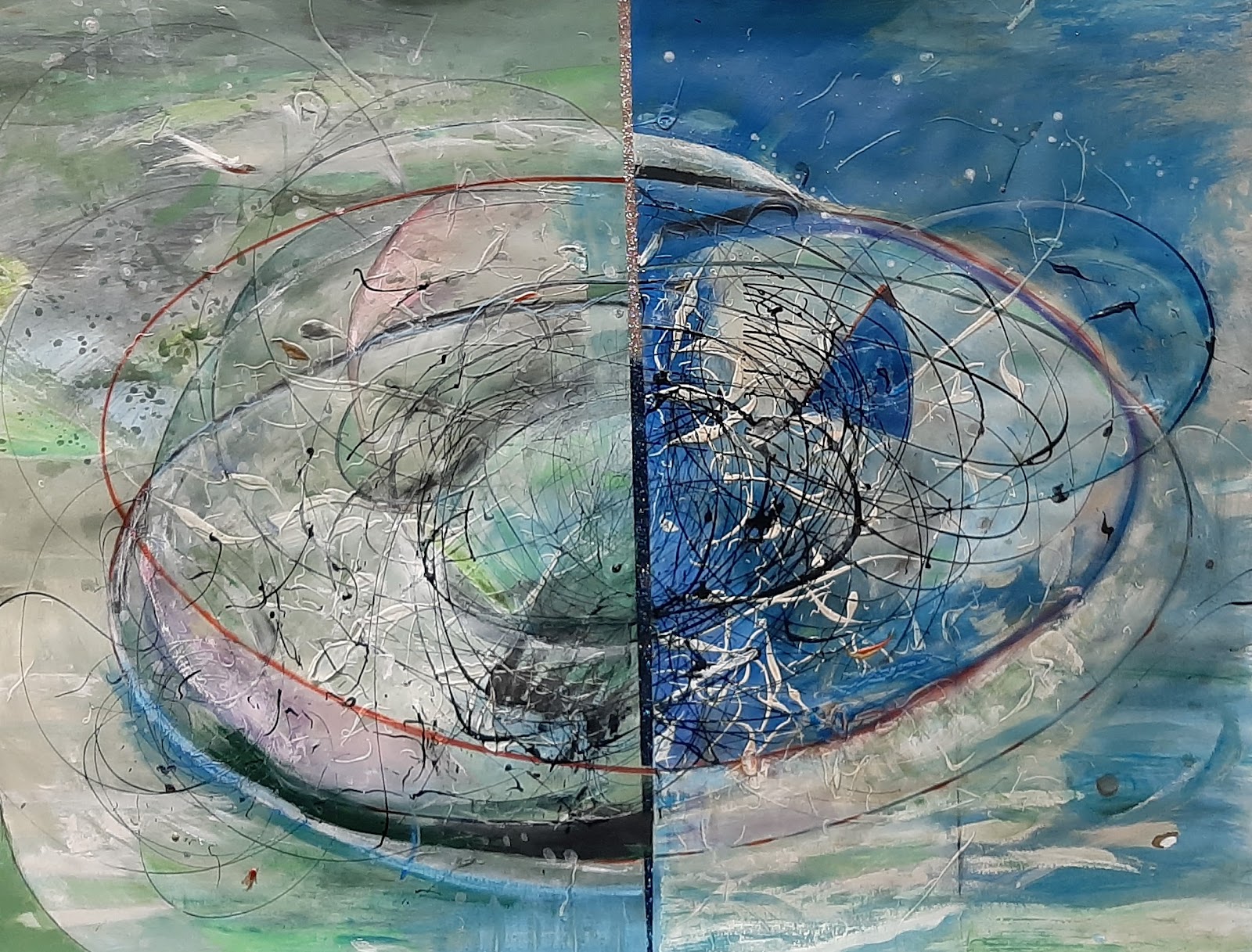 My artwork began  reflecting these world struggles and inner emotions- moving from the unifying balanced idea of the circle to the unsteady representation of ellipses. We view the earth as a sphere but there are intricacies that are left out of our common knowledge. The earth is actually a spheroid, or an approximate sphere, flattened at both poles and bulges at the equator. Thus began The Fragile World  series of drawings.   The subject matter is challenging as is the meaningful composition .I divided the 38”’x 50” paper in half representing the chaotic questions, the division, the transitions and transformations of 2020.

Just going around in circles Throughout history there have been identifiable symbols that have emerged and morphed that identify past struggles, concerns and inspirations. Here are a few that come to mind. 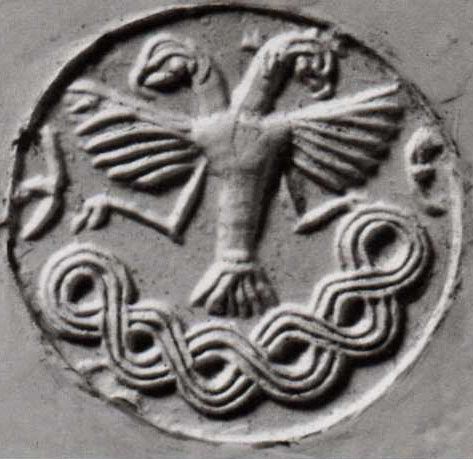 "the instrument by which all transformations were empowered."

The double-headed eagle is a motif that appears in Mycenaean Greece and in the Ancient Near East, especially in Hittite iconography. It is said to be both material and spiritual and is the magic potion of life- the fertile soil from which the spirit-body grows- the stone did not appear special because it was carved with easily available common materials thus the symbol of the eagles was rejected and ignored by the ignorant and profane. The historical irony is it became a symbol of Royalty. 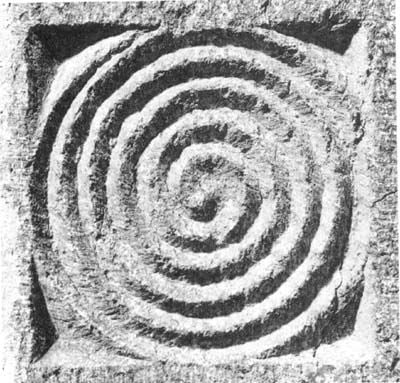 It is a sacred symbol that reminds us of our evolving journey in life, appearing as far back as prehistoric Ireland. It reflects the universal pattern of growth and evolution.  It is mirrored  in the natural world, and is found in human physiology, plants, minerals, animals, energy patterns, weather, and growth. The Spiral is also a prominent theme in the anime Gurren Lagann, where it represents a philosophy and way of life. Gurren Lagann takes place in a future where Earth is ruled by the Spiral King, Lordgenome, who forces mankind to live in isolated subterranean villages (sound familiar?). 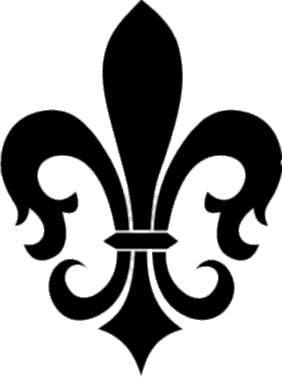 The fleur-de-lis is a stylized lily used as both a decorative symbol and a coat of arms . It has been used by French royalty and throughout history to represent Catholic saints of France.  The Virgin Mary and St. Joseph are identified with the lily referring to hope, joy and courage. 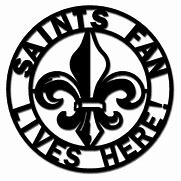 Since France is a historically a Catholic nation, the fleur-de-lis became

"at one and the same time, religious, political, dynastic, artistic, emblematic, and symbolic,"

And yes,the fleur-de-lis  is still an important symbol -for example, the New Orleans Saints football team. 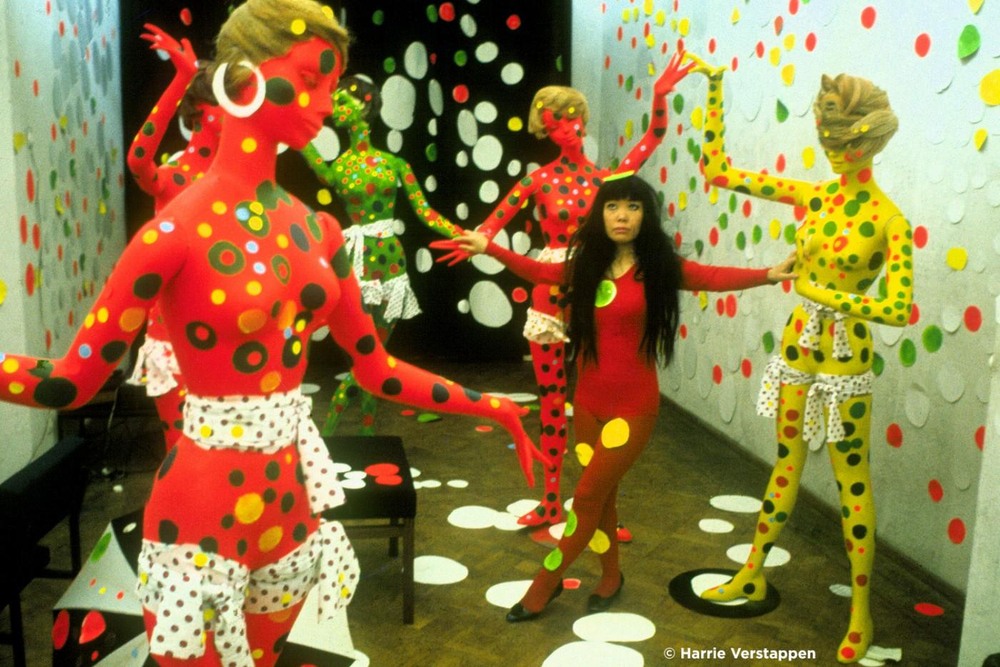 During the counterculture and social revolution of the 1960’s psychedelic symbols became a prominent representation of the time, including polka dots, (and spirals) seen above by Artist Yayoi Kusama in the Orez Gallery in the Hague, Netherlands in 1965. The 60’s questioned the conservative lifestyle and materialism of the 1950’s as well as the American involvement in the Vietnam war. When I was 10, I  thought polka dots were the bottoms of the question marks and everyone had so many questions to ask.

Despite the evolution of the world, history has a way of coming symbolically full circle polka dots and all… 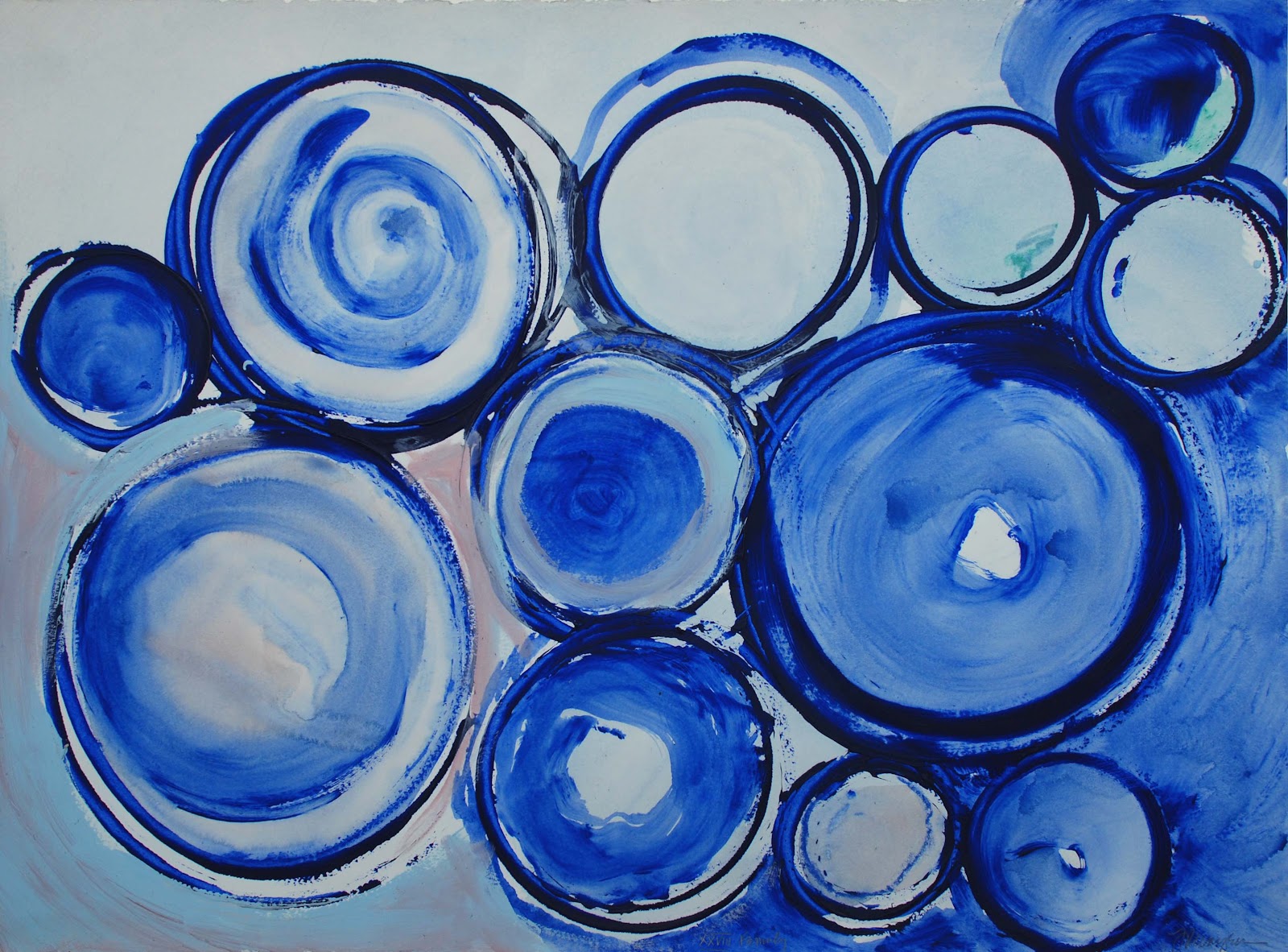 Cover Girl
How Did we get to Chocolates and Roses?
Blank Canvas: Why Art Matters
Art of Winter: Part Two
Blank Walls: Start with the Art
The Art of Winter: Part One
The Eureka Moment
The Shape of Our Time
June 2020: We Need Art in Our Homes.
You Are My Sunshine

The presence of this badge signifies that this business has officially registered with the Art Storefronts Organization and has an established track record of selling art.

It also means that buyers can trust that they are buying from a legitimate business. Art sellers that conduct fraudulent activity or that receive numerous complaints from buyers will have this badge revoked. If you would like to file a complaint about this seller, please do so here.

This website provides a secure checkout with SSL encryption.

Your cart is currently empty.

This is only visible to you because you are logged in and are authorized to manage this website. This message is not visible to other website visitors.

Below, select which favorite lists you would like to save this product into.

Enter your email below and we'll email you a 20% OFF Coupon right now!

This offer is valid for NEW CUSTOMERS only!

We hate spam and will protect your email address